Our Lady of the Sacred Heart Roman Catholic Church 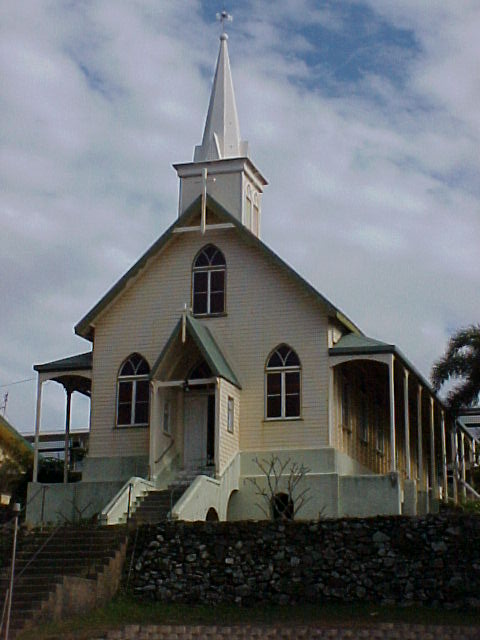 the Sacred Heart Fathers establish a Mission in New Guinea. It was decided among the Fathers that the setting up and servicing of such a Mission would be better faciliated if a site was chosen in the Torres Strait. Such a site would serve as a stopover station and a permanent link between Australia's mainland and New Guinea. It was then that Thursday Island was selected for this purpose.

On October 24th 1884, Father Andrew Navarre, Father Ferdinand Hartzer and Brother Guiseppe de Santis arrived on Thursday Island to establish the Sacred Heart Mission. The historic church, which still stands today, was built only a few years after their arrival. The M.S.C brothers ran the Mission until January 21st 1886, when the first Sisters were welcomed to the Island. They were Sister Paul Perdrix, Sister Madeleine Masselin and Sister Claire Dessailly of the Daughters of Our Lady of the Sacred Heart, all of who had french origins.

The sacred Heart Mission had also begun a tiny Catholic School on the closed-in verandah of the Convent. Sister Margaret Sweeny, the first Australian daughter of Our Lady of the Sacred Heart, taught the children - a handful of European, Filipino and Manila students.  The Parish has always been noted for its diversity of parishioners, which can be traced back to its earliest beginnings. The M.S.C Brothers had also built an orphanage on church grounds where the constitution, dated June 20th 1889, read:

"St Henry's Roman Catholic Asylum is a charitable institution where children of every race and denomination are received to be boarded and educated by the Sisters of Our Lady of the Sacred Heart. Children of both vicariates of New Guinea and New Britain belonging to the Society of the Missionaries of the Sacred Heart are entitled to be received into it.... Should parents or guardians for a good motive be unable to pay expenses, children are kept free."

The orphanage continued to be in use until evacuation procedures was in place during World War II in 1942, but was re-opened for a short period of time in 1948. However, as child endowment payments began, parents were given the much needed assistance to care for their families and the need for an orphanage soon vanished. From 1961-1962, the orphange was converted into a school by volunteer labourers from the local community. Bishop O'Loughlin blessed and opened the school in February 1962.

Today the church has a number of achievements, which included the establishment of the "Star of the Sea", a home to serve the elderly people of the Torres Strait. The Hon. Charles Porter opened the home on February 14th 1980, and appointed Sister Mary Garnier to be the first Sister-in-Charge. Four years later, the Our Lady of the Sacred Heart Roman Catholic Church celebrated its first centenary in 1984.

If you would like further information, there are a number of books dedicated to the history of the church, one of which is "Our First One Hundred Years - Sacred Heart Mission, Thursday Island 1884-1984." , which was the primary source for the information contained in this page. A copy is available from the Torres Shire Municipal Library. Please feel free to come in and browse at your own leisure.